The Next Big Theme: September 2021

Buy now pay later (BNPL) services grew 85% in the past 15 months, and much of that growth can be attributed to industries outside traditional e-commerce and fintech.1 Affirm recently announced a partnership with Amazon to allow Amazon customers spending $50 or more access to Affirm’s installment payments.2 Amazon shoppers will be able to split the cost of transactions into segments, penalty-free. This news followed payment services company Square acquiring Afterpay in a $29 billion all-stock deal.3 Square is known for its mobile point of sale (POS) system and card acceptance services for micro-merchants through its Cash App platform. The Afterpay acquisition brings BNPL into Square’s ecosystem, which should strengthen its omnichannel offering. Additionally, Afterpay consumers will be able to manage transactions and pending installments within the Cash App.

In a step towards approval of the $1.2 trillion bipartisan deal in late September, House Democrats passed a $3.5 trillion infrastructure-related budget resolution.4 The budget resolution essentially allows Democrats to write and approve a massive spending package, and it puts the Senate-passed infrastructure bill on a path for President Biden to sign it into law. Notably, the latest updates to the bill highlight investment in solar energy sources, which will help the U.S. to work towards President Biden’s 2035 clean electricity goal while keeping energy costs for consumers and communities low. This commitment to solar energy could add a meaningful number of jobs to an industry that currently employs about 300,000.5 Other important components of the bill include measures to strengthen transportation and transit, water infrastructure and environmental remediation, digital infrastructure, and cleantech.

T-Mobile’s recent data breach is the latest incident to reveal critical vulnerabilities in a major firm’s cybersecurity defenses. To address the breach, T-Mobile will partner with cybersecurity firm Mandiant and KPMG consultants. The move comes alongside the Biden Administration’s efforts to modernize the nation’s cyber defenses as part of its National Security Memorandum on Improving Cybersecurity for Critical Infrastructure Control Systems. In addition, the National Institute of Standards and Technology (NIST) will work with the private sector to bolster general and supply chain security. Apple announced plans to establish a security program with similar objectives. Elsewhere, Google committed to invest $10 billion and Microsoft $20 billion over the next five years towards zero-trust programs and open-source security.6 IBM took a workforce-based approach in vowing to train 150,000 people in cybersecurity skills, similar to Amazon’s offer of free security awareness training to the public.7

Robots aren’t just for industrial supply chains anymore. Previously, robots were used primarily to automate factory jobs too tedious or dangerous for humans. Now, they’re moving to the front of the house as robotics integration becomes more human. For example, salad chain Sweetgreen announced its acquisition of robotic kitchen, Spyce, whose technology should enable Sweetgreen to automate tasks like food assembly and allow its employees to focus on hospitality. Not only are robots increasingly performing human tasks, but they are also beginning to resemble them. Electric vehicle giant Tesla wants roboticists who can build its new humanoid robot, the recently announced Tesla Bot. Coming in at 125 pounds and a walking gait of 5 miles per hour, Tesla Bot will handle automated machines at Tesla factories and some of the hardware and software that powers the automated driver assistance software.8

With 5.48 billion people vaccinated globally to date, the biggest barrier to a healthier future is how SARS-Cov-2 mutates and reduces vaccine efficacy.9 In the U.K., rapid genome sequencing and PCR-based genotyping of SARS-CoV-2-positive nose and throat swabs from patients identified potential vaccine-escape variants. The tests identified two cases of a potential vaccine-escape variant from the B.1.621 lineage with a K417N spike mutation, which is associated with vaccine escape in the beta variant first identified in South Africa.10 The success of pinpointing mutations and the origin sources could encourage others to follow suit. In India, the Government of Delhi asked districts to send all positive samples of COVID-19 for genome sequencing. In the U.S., the Centers For Disease Control and Prevention (CDC) released $20 million to the New York State Department of Health to help conduct genome sequencing.11

News that the Senate’s infrastructure bill anticipates raising $28 billion in revenue from IRS taxes collected on owed capital gains from sales of Bitcoin, Ethereum, and other digital assets surprised many. Importantly, it could be a big step toward the government formally accepting crypto currencies as a legitimate asset and/or form of payment.12 Central bank digital currencies (CBDCs) are fast becoming a solution to traditionally underbanked countries. At the intersection of physical currency and digital currencies, CBDCs offer the digital form of preexisting physical currencies using distributed ledger technology. As of August, two central banks spanning five Caribbean countries fully launched CBDCs under The Central Bank of the Bahamas and Eastern Caribbean Central Bank.13 And India’s central bank is the latest to announce the possibility of CBDC trials later in the year. 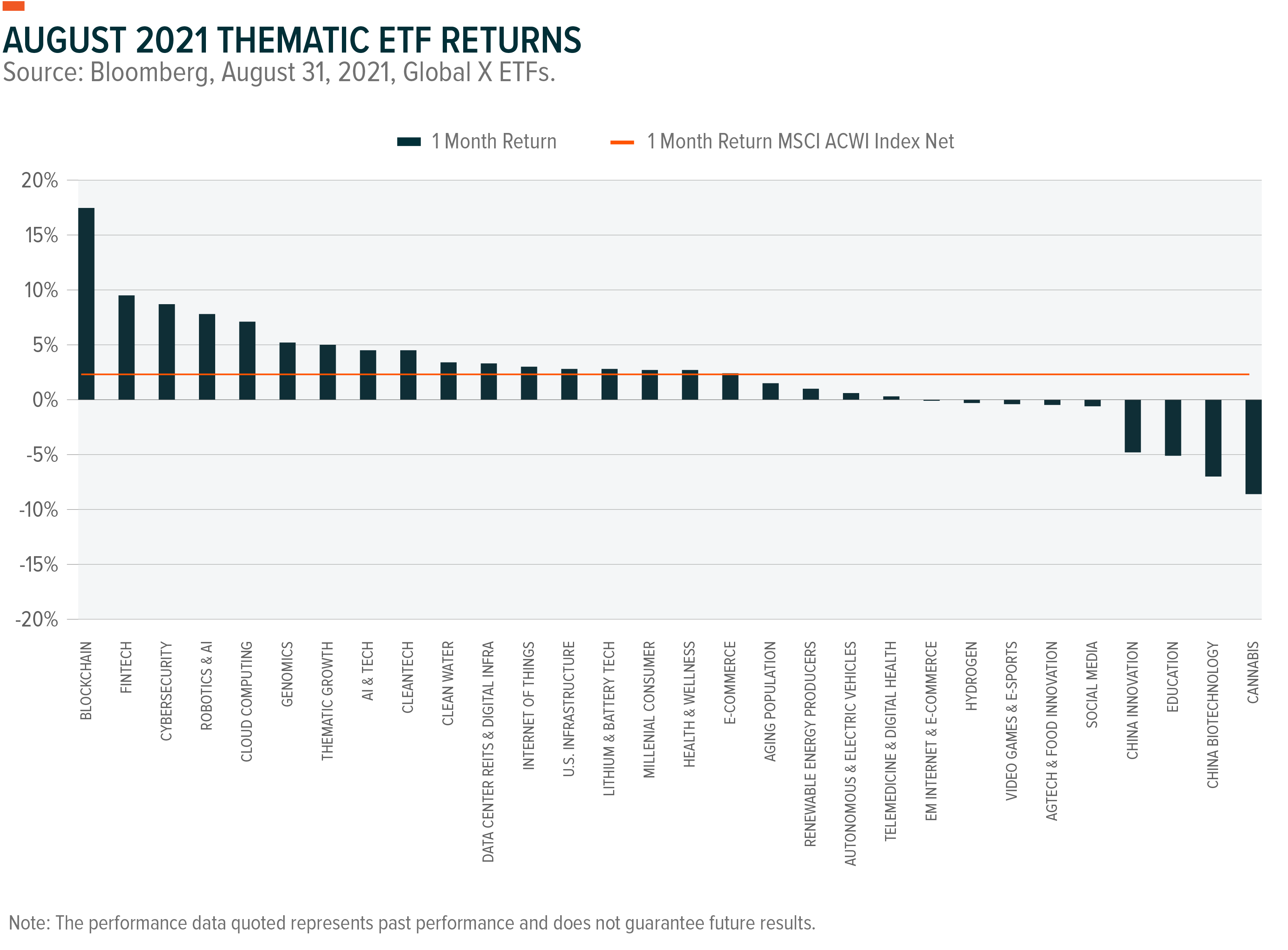 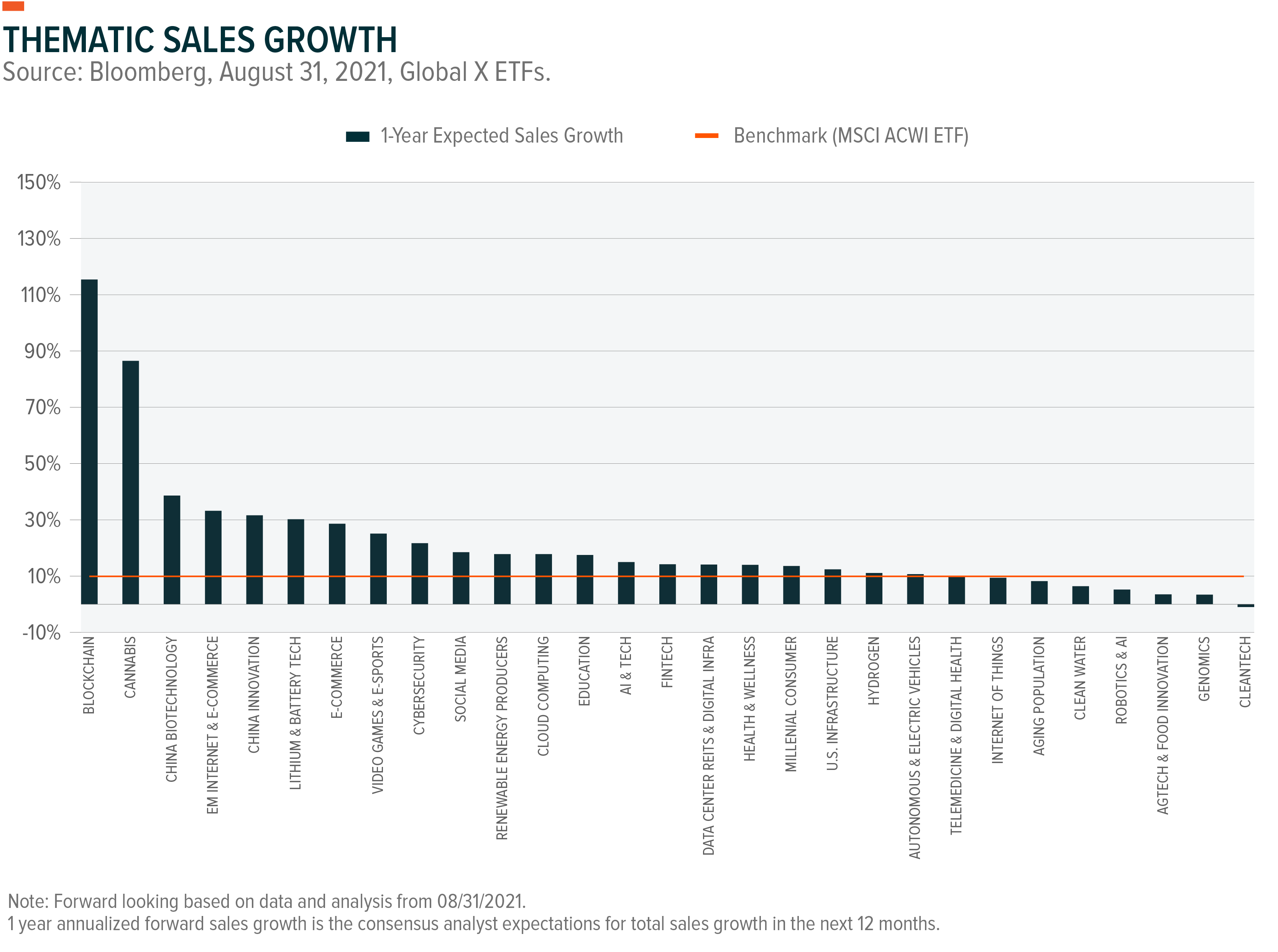 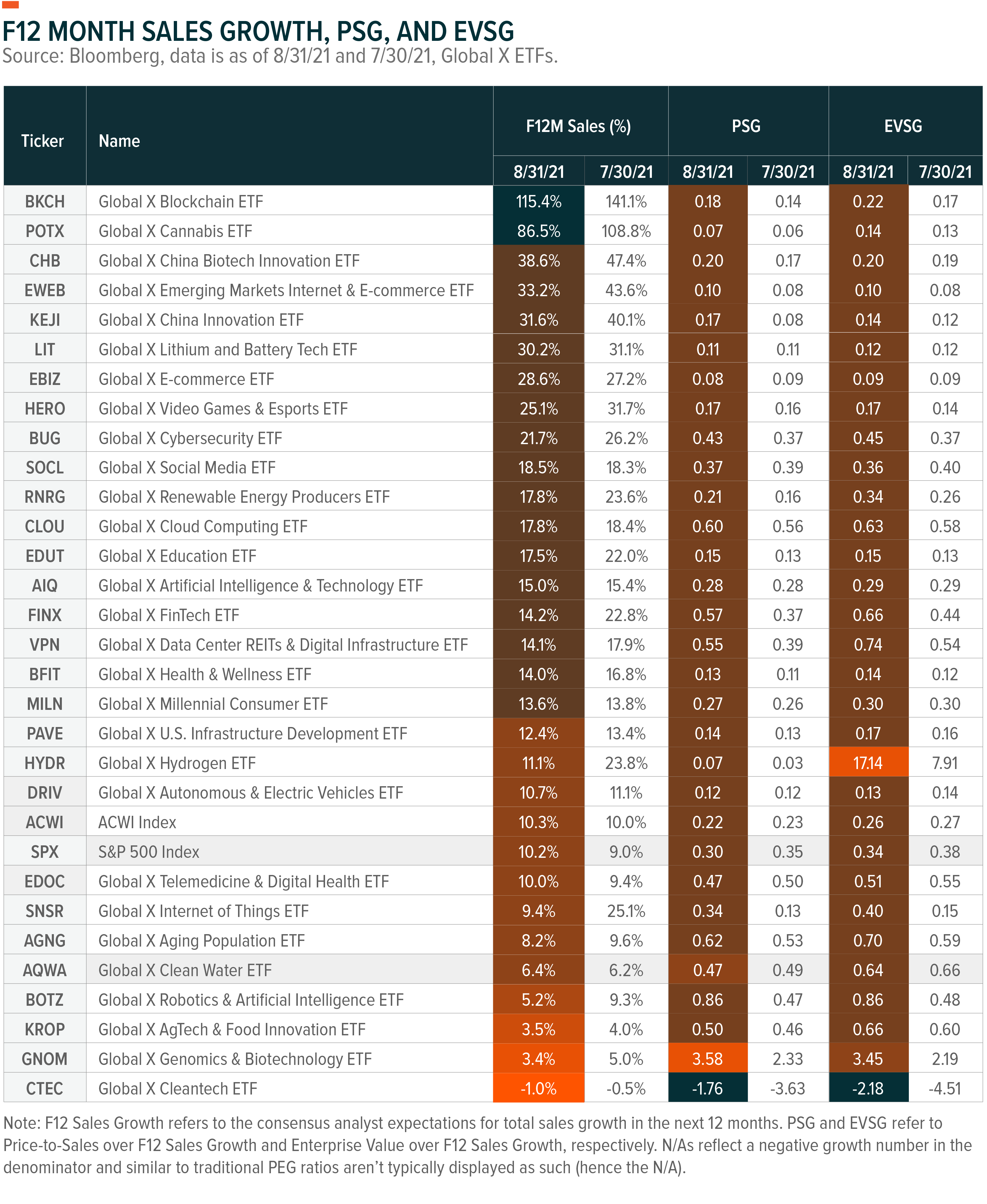