Today’s videogame industry has come a long way since the days of Atari consoles and video arcades. Yes, technological improvements now enable hyper-realistic 3D graphics that look nothing like the flat, jagged-edged 8-bit characters of the 1980’s. But just as meaningfully, the preferences of a new generation of gamers are evolving, and so too are the companies seeking to meet those demands. For an industry that typically moves linearly from each console generation or game edition to the next, 2020 may seem like just another incremental improvement as next-generation consoles launch later this year. But underneath the veneer of even more polished graphics, the industry is preparing for long-term transformation that could upend the sale of consoles and games.

In this piece, we explore what the 2020 console upgrade cycle means for the industry and how advancements in cloud gaming may mean this is the last PlayStation and Xbox.

Both Microsoft and Sony are expected to release the new Xbox and PlayStation consoles this upcoming holiday season, representing the first major hardware upgrades since 2013. The new consoles are expected to feature 8K TV support, ray tracing, and solid-state drive (SSD) storage – enhancements that will bring unprecedent realism to games and faster load times. Other details are still kept under a tight lid by the manufacturers.

Despite the growth in PC gaming, consoles still make up a larger portion of the gaming market. Consoles account for 30% of the 2019 global gaming market at $45.3 billion.1 PCs fall slightly behind with 24% market share or $35.3 billion.2 Mobile, which we’ll discuss shortly, represents the biggest market with 46% share or $68.2 billion.3 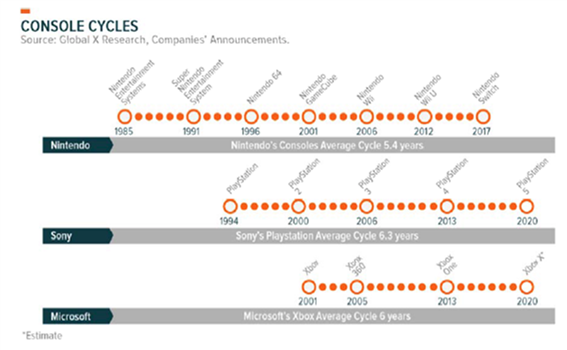 Historically, the release of a new console generates positive spillover effects for game developers. After all, what’s a cutting-edge console without a new game that can take advantage of those features? New titles expected to be released include the latest iterations of established franchises like Battlefield 6 and The Sims 5, while others are expected, but still to be confirmed, like GTA 6 and Assassin’s Creed Ragnarok.

The last console upgrade super cycle translated to strong stock returns for game developers. During the 2013 console upgrade cycle, which included the Xbox One and PS4 rollouts, on average, leading game publishers like Activision Blizzard, Take-Two Interactive, Ubisoft, and Electronics Arts outperformed the broad market and the tech sector. PS4 sales reached approximately 4.2 million and Xbox One reached 3 million in about five weeks until the end of 2013, while top selling games like Call of Duty: Ghosts reached 12.7 million units during the same period.4 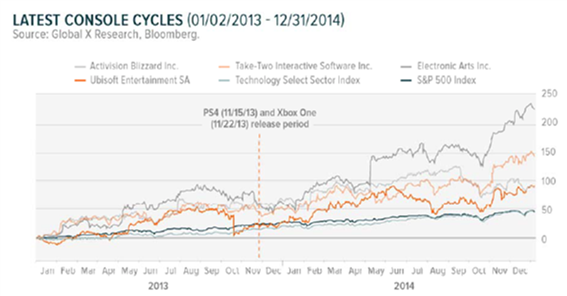 Performance shown is past performance, based on the closing price of the securities and does not guarantee future results. The investment return and principal value of an investment will fluctuate so that an investor’s shares, when sold, may be worth more or less than their original cost and current performance may be lower or higher than the performance quoted.

Note: Annual Eq. stands for Annual Equivalent Rate is the rate of return on a annual basis after accounting for effects of compounding.

No Need to Hit Pause: Cloud & Mobile Extend the Experience

While the latest console release may serve as a near-term catalyst for the gaming industry, it may also be the final chapter of the console era. Tech giants are already preparing technology for a console-less future that enables gaming across multiple devices, such as Microsoft’s xCloud, Sony’s PlayStation Now, and Google’s Stadia. Cloud gaming means that games are run from a remote server and streamed across TVs, laptops, desktops, tablets and phones via a fast internet connection. Gamers can play the same game, from device to device, on the go, picking up exactly where they left off.

Just as Netflix disrupted the distribution model for movies and TV shows, cloud gaming could have a similar impact on the videogame industry. Because cloud games are streamed rather than installed or downloaded locally, gamers could shift from purchasing individual titles to joining a subscription-based service with access to a broad library of games. Apple has already pioneered this model in the mobile space, joining forces with developers to create games for their Apple Arcade subscription service with unlimited access to 100+ games. Such a service shifts from one-off title purchases to recurring revenue and can aggregate valuable data about each gamer, resulting in targeted advertising and offers.

Of note, today’s hardware features are still difficult to fully replicate in the cloud. When playing on a console, processing is conducted locally, which reduces latency and allows for high quality visuals. For now, cloud gaming promises an alternative, not a replacement to console-based experienced. However, it’s likely that within the next seven years, that cloud-based gaming will displace consoles, as 5G speeds and edge computing eliminate latency issues.

Another major shift in the gaming world away from consoles is the rise of mobile. Mobile gaming sees more spend than all other forms of gaming combined because it democratizes the experience for approximately 3.2 billion smartphone users.5

New peripherals are making it easier to play games on a phone, including 3rd party controllers, VR headsets, and battery packs. And advancements in 5G will further lay the foundation for high-quality gaming experiences on the go.

As game publishers and developers seek capitalize in the $68 billion mobile gaming market, well-known titles have continued to migrate to mobile, changing the stigma that mobile game compromises quality.6 Call of Duty and Mario Kart Tour are just a few examples of major gaming franchises available on mobile. In addition, perennial mobile bestsellers like Candy Crush continue to demonstrate how free-to-play (FTP) games can generate strong recurring revenues via ads and in-game purchases.

Console super cycles are rare, and we expect this year’s release of the PlayStation 5 and Xbox series X to provide a major near-term tailwind for hardware producers and game developers capitalizing on the new technology. Yet at the same time, gaming continues to evolve as consumer preferences for cross-platform, on the go availability rises in tandem with cloud technology. As such, gaming will soon move to the cloud where it can be accessed anywhere and by any device, allowing for new business models and gameplay.

HERO: The Global X Video Game & Esports ETF seeks to invest in companies that develop or publish video games, facilitate the streaming and distribution of video gaming or esports content, own and operate within competitive esports leagues, or produce hardware used in video games and esports, including augmented and virtual reality. Click the fund name above to view current holdings. Holdings are subject to change. Current and future holdings are subject to risk.